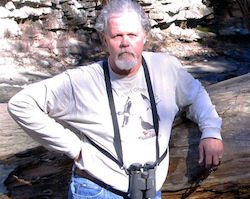 David’s birding epiphany came in 1973 when he saw a small bird dispatch and consume an even smaller bird in order to feed its nestlings. The bird on the menu was a House Sparrow & the other bird was a Loggerhead Shrike.

In 1986 he became a volunteer with the Florida Breeding Bird Atlas Project, and during the next 6 years spent vast amounts of time in the field with some of the most experienced birders in Florida. This activity was the impetus for what could now rightly be called an obsession to observe birds whenever possible.

In 1994 he became the Volusia County Compiler for the North American Migration Count, and has served in that capacity to the present.

In 1996 he reestablished the Daytona Beach Christmas Bird Count and continues as it’s compiler. Since 1987 he’s been the Conservation Chair for Halifax River Audubon in Daytona Beach.

After serving 4 years as President, he recently assumed the duties of newsletter editor. He has led many field trips for Audubon, The Nature Conservancy, the Space Coast Birding & Wildlife Festival and other groups.

He has led multiple birding trips to the Dry Tortugas.