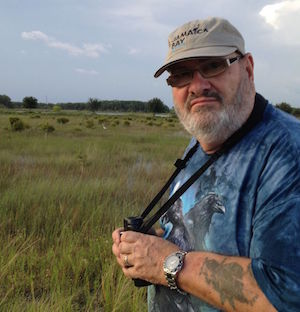 Wes is one of the best-known birder/naturalists in Florida. A birder since the age of 5 in upstate New York, his family moved to St. Petersburg in 1962, and for over 50 years he has been involved in every aspect of Florida ornithology, from scientific research, numerous conservation projects, journal articles and book contributions to ecotourism and the fun of listing. As the State Coordinator of the Florida Breeding Bird Atlas Project from 1986 through 1991, he was one of the leaders of the biggest ornithological project in Florida history.

Wes is a founding member of the Florida Ornithological Society and is the co-compiler of the Zellwood/Mt. Dora Christmas Bird Count, considered to be the best inland count in North America. Wes has participated in & led over 200 pelagic trips in Florida and 11 other US states and Canadian provinces. He started leading field trips with the St. Petersburg Audubon Society at the age of 16, and for over 40 years has conducted birding tours as well as private guiding throughout Florida, North, Central and South America, and the Caribbean. Wes is also knowledgeable in many other areas of natural history and the history of Florida ornithology. He cherishes and makes good use of his extensive ornithological library.

Competitive birding, or listing is a unique sport because most of the people who do it help the people with whom they’re in competition. If you question the notion that birding is a sport, check out the January 19, 2004 issue of Sports Illustrated! In the spirit of cooperative listing Wes has reached some lofty heights. With 495 species observed in Florida, (adhering to the American Birding Association Checklist and rules) he is in first place, and he’s ranked number 7 on the lower 48 states list with 799 species. He’s seen 803 species in the ABA area.

(The March-April 2010 issue of Bird Watchers Digest has an article by “The Fat Birder” Bo Beolens entitled An Englishman in Florida that describes his 5 days birding with Wes.

“My adventures in the Dry Tortugas started when I was 17 years old, and Russ Mason invited me to take part in the June 1966 tern banding expedition. Russ was for many years the executive director of the Massachusetts Audubon Society, and at that time held the same position with the Florida Audubon Society. Russ and Oliver Austin had started the project in the late 1930’s, as a joint Audubon/National Park Service venture, making it the longest running ornithological study in the world. Like Russ, Dr. Austin, (who for many years was editor of the Auk) had migrated south from the Bay State, to became the head of the Ornithology Department at the University of Florida. The two project founders were still involved, but the leadership of the project had passed from Audubon to the NPS with Dr. William B. Robertson at the helm. We banded many thousands of Sooty, Brown Noddy and Roseate Terns, and I saw my first White-tailed Tropicbird! On June 8, 1966 we were hit by the 130 mph winds of Hurricane Alma and all hell broke loose. As a result I became a part of the first scientific team to study a major tern-nesting colony from within the eye of a hurricane! From within the eye we observed Black Swifts & Gray-rumped Swifts, the only Florida report for both species, and the only Gray-rumped report for North America. The following June as my high school classmates were attending our graduation ceremony I was back in the Dry Tortugas banding terns, this time with Dr. Glen Woolfenden as Bill’s executive officer and Dr. Austin as the “Overseer.” I got my diploma in the mail. After a few years with the Navy and Marine Corps I returned to the Tortugas for the 1971 tern banding expedition. After college I led privately guided birding tours throughout Florida, and elsewhere in the Western Hemisphere, and many tours to the Dry Tortugas.”