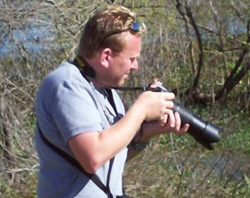 Gallus started birding while in the eighth grade in his home state of Pennsylvania.

He is a biologist, conservationist, trip leader and highly competitive lister.

He has many years of hawkwatching experience at Hawk Mountain PA and at Montclair NJ as both a volunteer and as a professional hawk counter and was involved in banding/radio telemetry work with endangered Florida Grasshopper Sparrows at Kissimmee Prairie Preserve State Park.

As a biologist with Lake County Parks he wears many hats, working not only as a Biologist but as Park Ranger, Trails Planner, and Events Coordinator.

He has led countless field trips in Central Florida for a number of Audubon chapters. His popularity as a birding guide in Florida is well known throughout the birding community.

Gallus was one of the Florida birders featured in Bo Beolens’ March/April 2010 Birdwatchers Digest article.

Gallus recently joined the ranks of the elite group that has seen 400 species in Florida, and he did it with style too, a White-tailed Tropicbird! His Florida total is now at 435 species!

He has led multiple birding trips to the Dry Tortugas.

Gallus was the Florida Breeding Bird Atlas II Lake County Coordinator & is the Ebird reviewer for Lake & Sumter Counties & the Ebird Hotspot reviewer for Florida. He has been the Keynote Speaker at Lake County’s Wings and Wildflowers Festival, and was featured in an episode of ‘Birding Adventures with James Currie.’ He did a Lake County Big Year in 2015 to promote birding and ecotourism in his home county and recorded a record breaking total of 243 species.